The Airedale Terrier is the largest breed of terrier. Males stand about 23 inches tall at the shoulder, while females are slightly shorter.

Tan with black patterns on the strong, wiry coat. Airedales have regal bearing because of their long, powerful legs, and their tall head with its sporting beard and mustache, dark eyes, and neatly folded ears conveys keen intelligence.

Airedales are the epitome of a vigilant and eager terrier only bigger.

And, like his smaller terrier cousins, he may be brave, determined, and stubborn. Airedales are gentle and patient with children, but they will not back down with protecting the hearth and home. Airedales excel in a variety of sports and family activities because of their well-known can-do attitude.

If you’ve recently adopted one and aren’t sure how to raise them properly, an Airedale Terrier growth chart will come in handy.

This page will teach you on the growth of an Airedale Terrier, their health difficulties, and the elements that influence their growth.

When Do Airedale Terriers Stop Growing?

Airedales will reach full maturity 8-12 months after birth, though they may retain some lankiness and may not fill out until a year and a half. Some men take even longer, not reaching full growth until they are two years old or older.

There are some broad growth milestones you can use to track your dog’s progress:

Having the correct height measures for your dog is critical for a variety of reasons. For example, you’ll need the measurements so you can get your dog the attire and a harness that fits precisely.

Finding your dog’s height is also necessary when purchasing a dog kennel or door, as well as when entering your dog in shows.

A tape measure and flat ground are required to measure the height of your dog. Make sure your puppy is standing upright on the floor, with their feet evenly spread. If your puppy is too enthusiastic to stand still, allow them to stand on the table while someone holds them.

Locate their withers, which are at the base of their neck. It is the position between the shoulder blades that is the tallest.

Measure from the ground to the withers with the measuring tape. This is the height of your dog. 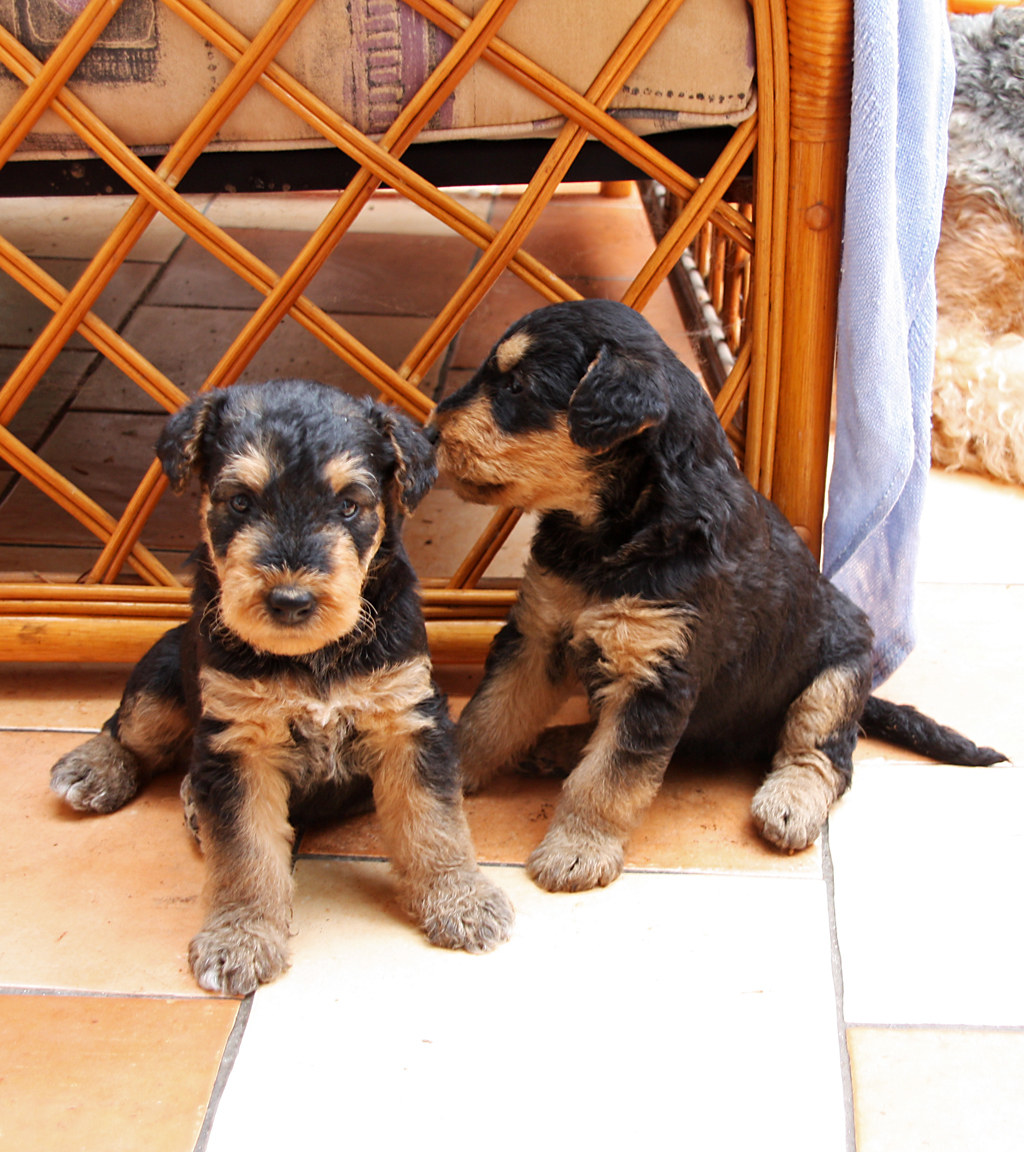 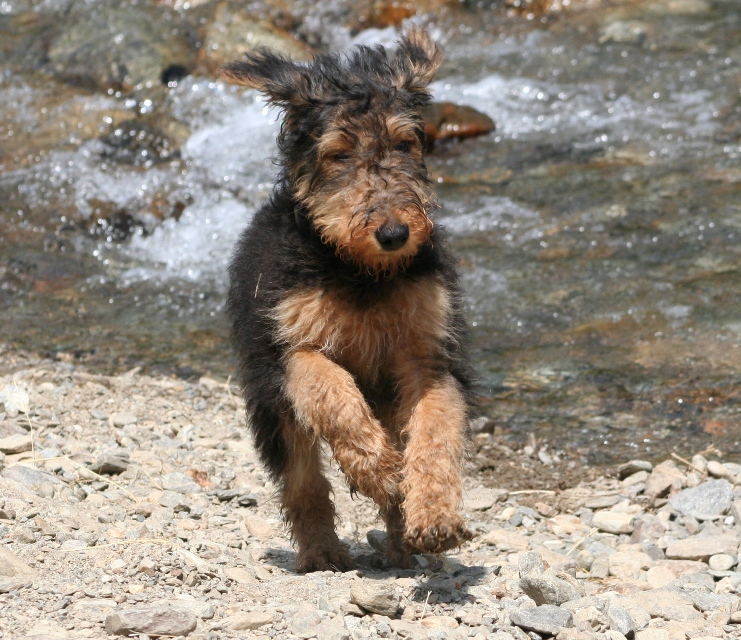 What is the Standard Airedale Terrier Size

Because Airedale Terriers are prone to obesity, keep a close eye on what they eat and exercise them regularly. When they gain weight, they should gain muscle rather than fat.

Walking them and taking them to the park for fun can help them maintain a healthy weight throughout their lives.

Here is the Female and Male: Weight Chart of Airedale Terrier:

This is the newborn stage, and the puppy will spend the most of its time sleeping and eating. Their ears and eyes are still closed. When the puppy is two weeks old, it is wormed for the first time.

The puppy gets its nutrition from the mother’s milk, and if the milk is insufficient for the litter, the breeder can supplement it with puppy formula.

This is the time of socialization during which the puppy learns appropriate social behavior in the presence of other canines and people.

The mother trains them to be attentive, to inhibit bite, to be confident around other dogs, and to be obedient.

The puppy will go through a ‘fear’ period at this moment, which is natural and not to be concerned about.

The puppy’s first teeth appear at three weeks, and at four weeks, the breeder can begin the weaning process by giving the puppy their first food. The puppy is ready to go to their new home at eight weeks.

This is the teenage stage, which is distinguished by an increase in self-assurance, curiosity, and independence.

This is the ideal time to enroll your puppy in training programs to teach them about socialization and obedience.

This is the period where they try to assert their authority and establish themselves as the pack’s leader. Spaying or neutering should also take place during this time.

During this time, most Airedales will reach adult weight and height. Some people may gain emotional maturity sooner, while others may take longer.

Because your puppy’s nutritional needs have altered, now is the time to move him to adult food. Consult your veterinarian about the changeover so that you don’t upset your puppy’s tummy.

We consider Airedale Terriers adults when they reach the age of 18 months and have reached full mental, physical, and sexual maturity.

This is the time at which all the training you accomplished when your puppy was little will pay off.

This is the time at which they should monitor their weight to ensure that it is always healthy in order to prevent the development of health disorders such as diabetes, obesity, and heart disease. Regular visits to the vet are recommended.

How Big Do Airedale Terriers Get?

Your dog’s growth and development may be influenced by nutrition. Puppies require nutritious meals while growing; therefore, feed your dog the amount of food for their age to achieve optimal growth.

Though opinions range on what is the best dog food for an Airedale Terrier, premium dry food is the most practical and popular option. Airedales require a well-balanced diet rich in proteins, carbohydrates, and omega fatty acids, and cheap, generic, or “store-brand” foods lack many (if any) of these nutrients. High-quality dog food is unquestionably the best option.

Here is the Feeding Chart for your Airedale Terrier:

This breed’s dogs are full of energy. Airedales were originally bred as working dogs, so they’re accustomed to days full of movement—so your Airedale Terrier will require some regular physical activity. These dogs are bright, playful, and task-oriented, so they benefit from a range of workouts, from lengthy walks or jogs to yard romps to obedience and agility events.

But how much activity does an Airedale Terrier require each day? The average adult Airedale requires around one hour of physical activity each day, depending on its age and total activity level. When an Airedale puppy is three months old, you can begin exercising it by taking it on short (10- to 15-minute) walks, accumulating the time of the walks as the dog matures.

Consider the following when exercising your Airedale Terrier: To begin, pups under nine months of age should avoid activities that require a lot of jumping and running, as this might harm their still-growing bones and joints. Second, it’s probably a good idea to keep your Airedale leashed when you’re out and about. These dogs have extremely high prey drives and are naturally strong-willed and independent; these characteristics make Airedales frequent wanderers and chasers, so they must be constantly managed when you’re out and about.

Aside from safety precautions, it is critical that you exercise your Airedale every day. A bored or restless Airedale will probably exhibit behavioral issues including barking, chewing, and destructiveness, therefore consistent activity is essential for an Airedale. Here are a few exercise suggestions:

How Long Are Airedale Terriers Pregnant?

Dogs have a normal gestation length of about 63 days from conception, though this can vary by several days. While this may appear to be a simple response, conception is often difficult to determine. Because sperm can survive inside the female for several days and eggs can stay viable for up to 48 hours, the act of mating is not a perfect measurement of gestation. Without the advice of a veterinarian, it is difficult to expect the length of the pregnancy.

Hormone measurements provide a much more precise time frame for pregnancy. During the breeding phase, several breeders use vaginal swabs and blood tests to check reproductive hormones. This assists them in determining the optimal time to breed their buck, as well as the length of gestation and likely due date.

How Many Puppies Do Airedale Terriers Have?

The average litter size of a healthy Airedale Terrier is nine puppies.

What Is The Life Expectancy Of Airedale Terriers?

If your Airedale Terrier is overweight, or underweight, they are not the weight. Obesity in dogs can lead to knee and back problems, heart illness, a shorter lifespan, and respiratory difficulties.

As a result, for proper weight, feed your Airedale terrier a healthy food. Reduce the amount of carbohydrates in your dog’s diet because they can be stored as fat in the body.

Maintain a well-balanced diet and schedule your dog’s mealtimes to prevent hunger. Mealtimes are also important for maintaining metabolism and meal utilization in the body.

Mealtimes regularly discourage them from scavenging around the house. Consult your veterinarian for advice on how to help your Airedale terrier gain or lose weight.

Taking care of your Airedale Terrier entails feeding them nutritious and balanced food as well as exercising them through walks and playtime.

Taking your puppy to the vet regularly will also keep their health in check because any illnesses will be caught early and your dog will remain healthy throughout their life.

What size will my Airedale grow to be?

What size is an 8-week-old Airedale?

At 8-10 weeks, Airedale puppies normally weigh around 10 pounds and stand 10 inches tall. Airedales typically do not achieve full adult size until they are one to two years old.

He can be violent to other dogs and animals, and he has a strong prey drive, making him difficult to control. The Airedale is believed to end fights rather than start them.