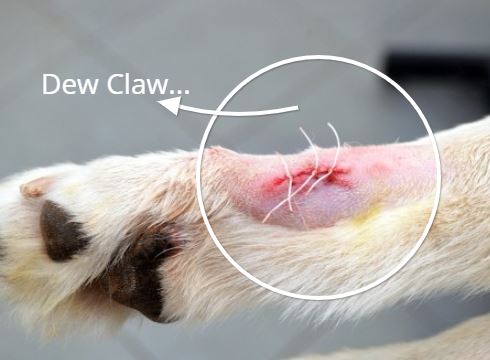 Have you ever observed your dog limping? Have you noticed your dog favoring a paw over the other? It’s essential you take your dog to visit a vet in order to be in the know of what the dog is facing. The dog is likely to have a torn or broken nail.

It’s common for a dog to have this injury, and it’s a good thing to understand the ways on how to identify and treat it at home. Among other injuries, the dewclaw injury is rifer in dogs. That’s because unlike other nails, they don’t wear down or weaken. Know this, whenever your dog walks, the claws (or dewclaws) aren’t used.

At the ankle region of an animal, the dewclaw is the only nail you can find. Either at an animal’s ankle region or above the front of their feet. Because of its position, this kind of nail is susceptible. This nail isn’t tightly attached, so its risk of having an injury is more significant than other regular nails. Though, nail clipping can cause this injury, too.

RECOMMENDED: Dog Dew Claw Removal (All You Need To Know)

Some owners are aware of the negative effect of clipping the nails, so they do away with clipping the nails of their dog; others indulge in such activities. The only thing the dog can do is to jerk his paw, and that is likely to give the dog a chipped or broken nail. If he goes ahead to yank it hard enough, it can result in a torn nail, partially torn nail, or he might even pull it out entirely.

If you’re reading this, one can guess and 100% get it correctly that you’re a dog lover. And, it’s undoubtedly true that you wouldn’t want to see your dog feeling excruciating pains — the dewclaws injury is an injury that comes with a painful experience for the dog. Do you want your dog to feel better? Your dog needs your assistance at this point. Your assistance would keep other issues such as other behavior problems and irritability at arm’s length.

Symptoms Of A Dew Claw Injury

How can you detect if your dog is suffering from dew claw injury? In a dog, there are a couple of signs which you should watch out for — signs that relate with the presence of this dew claw injury. The most important ones include:

RECOMMENDED: How To Deal With Dog Toenail That Splits In The Middle

When dogs are in pain, they tend to be stubborn. If your dog doesn’t permit you to check the injured paw, then it’s high time you visited a veterinarian.
Here is a video about Broken Dew Claw Treatment you Should Watch

It’s quite common for most dogs to suffer from this very type of injury — dewclaw injuries. There are situations which heighten the risk to the pain attached to the dewclaw injury; they include:

Diagnosis Of A Dew Claw Injury

You really don’t have to visit a veterinarian to diagnose whether your dog has been with a broken nail or not. Once you observe your dog displaying any of the symptoms, especially the licking of a particular paw and limping, you can tell the exact location of the area that’s affected. What you need to figure out the injury is a visual inspection.

– If your dog resists you from touching his toe or you can sense that he’s going through pains from that area, it’s required of you to go to the vet for local anesthesia or tranquilization.

Injured nails can bring pains, and may eventually lead to an infection. You don’t need to waste any time, start the infected dew claw treatment for your dog’s recovery right away.

Is the area bleeding? Make sure you waste no time in stopping that area from bleeding. There’s a type of bleeding that’s caused by removing the damaged portion of the nail — that bleeding is mild bleeding. The bleeding shouldn’t last beyond 24 hours, but if it does, here are tested remedies the bleeding to a stop:

Once the swabs are observably damp, let the crystals stick to the cotton and slowly apply it to the bleeding paw. You’ll need to hold it on the area for about 30 seconds. You should see the effect of doing such right away. If the bleeding hasn’t stopped, perform the action again but this time, press the swab upon the wound for five minutes. If it still does not stop the bleeding, make sure that you contact the vet immediately.

In case you observe any of the following symptoms stated above at home, you can make use of these home remedies for infected dew claw without leaving your house.

You can also employ the use of a bar of soap to stop your dog from bleeding. Just press it onto the claw of your dog for three to four minutes, and it will create a plug which seals the nail injury. It helps to hold the nail at a certain degree, 90 degrees precisely, with the nail firmly embedded in the soap for about three to four millimeters.

You can also mix flour, baking soda, cornstarch, and water until a thick paste is formed. Use a cotton ball to put the paste together and apply it directly and softly to the damaged nail. Allow it to sit there for a few minutes, and it should be able to lessen the bleeding. You can perform the remedy again to stop the blood loss completely

Note: The blood which the blood loses during nail removal isn’t dangerous — this is for healthy dogs though. The bleeding may look so severe, and your dog may be, at the same time, reacting to it. You may also have the blood poured all over the floor, and that can make you uncomfortable. Whatever happens, and whatever you do, always stay calm — especially when you’re in the process of performing the dog dew claw injury treatment. If you get agitated, your dog can sense it and also worry as well — even though he has trust in you. If you’re trying to remove a portion of the nail or all of it, ensure that you don’t give in to having shaky hands.

Do these to keep the infection from spreading:

– Bath the dog with warm water

– Apply antiseptic on the affected area

If it starts bleeding again after doing these, apply the styptic powder or pencil.

After doing these — broken dew claw treatment — your dog should recover from the dewclaw injury in just a day or two.