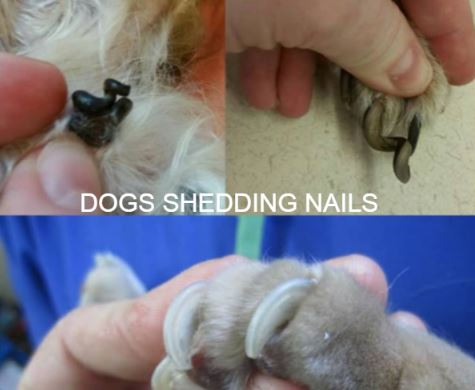 As a beloved owner of a pooch, you may have wittingly or unwittingly encountered with bewilderment, your dog’s nail around your home. Over time as the frequency with which you notice your mutt’s nail laying around increases, you may have been perplexed about this and may have first thought your dog may be down with a medical infection.

But you also may notice that your dog shows no symptom of any infection, and thus you may have wondered, Do Dog Shed Nails? Well, you’re certainly not alone. Several dog owners often put this question to their veterinarian, and on various public forums dedicated to discussing dog affairs.

STRESS FREE WAYS OF FEEDING YOUR DOG, GET ONE FOR YOUR PET


In this article, we will discuss in-depth details, the obscure facts about dog shedding nails. While noticing random shed nails of your dog around is no cause for alarm, as dogs do shed their nails naturally, keen observation is to be made as shed nails also indicate illness, infections or injuries.

To completely understand and evaluate the condition of a dog with shed nails, we’ll discuss also causes of shed nails aside from the natural.

Why Do Dogs Shed Nails?

Dog share quite a lot of similarities with humans and in nail shedding, those similarities come to the fore. Often, dogs possess weak nails, and in the course of daily activities, these weak nails, most times overgrown, often break. Dogs are often oblivious of this and these nails may eventually get stuck in their furs and other body parts.

Try checking your dog’s furs and knee, there probably will be a broken nail. Aside from these genetics, often specific to each breed of dog and each dog itself, considering parent’s health, play a significant role in a dog’s shedding of nails.

Environmental factors, such as the texture of the ground, and not surprising weather also affect the shedding of nails in dogs. It is important to note that though genetics plays a significant role in dog nail shedding, dogs are not biological hardwired to shed nails just like certain reptiles shed skins, rather shedding of the nail in every context where you most likely encounter this discussion refers to the gradual loss of nails in an unnoticeable manner, unnoticeable to a dog as well as it’s the owner.

As indicated earlier in this article, keen observation is required before coming to the conclusion that your shedding of nails in your dog is natural. Often, dogs shed nails may be triggered by several other factors that are not natural.

Nutrition: When a dog sheds nails at a very alarming rate, this no longer passes for natural, but requires keen observation to ascertain the factor responsible for its rapid nail shedding.

See also  Dogs With Back Dew Claws (All You Should Know)

Usually, nutrition is often the major factor behind the alarming nail shedding. This is as a result of the fact that just like humans, dogs’ nails are made of keratin. Keratin, a naturally occurring biological matter in the chemistry of a dog system is majorly made up of 90% protein.

The proteins which make up this Keratin are derived from a dog’s diet. A poor diet may thus not provide the right nutrients which in turn led to poor formation of keratin in a dog’s nail, and hence lead to rapid nail loss. If this is the case with your dog, we recommend you put your dog on an AAFCO (Association of American Feed Control Official) diet, with emphasis on the nutrients.

MUST-READ: How To Stop A Dog’s Toe Nail From Bleeding In Seconds

It is of utmost importance that nutrients should be the focus when picking a diet for a dog afflicted by rapid nail shedding triggered by poor nutrition. Ingredients though important, should not be the focus as nutrients can be sourced from various ingredients but may not be effective.

What if your dog is on a highly nutritious diet, yet exhibits rapid nail shedding? It is recommended you include more mineral, protein, and vitamin supplements in his diet. But if after this, your dog’s condition still doesn’t improve, then it’s maybe as a result of your dog’s inability to absorb the needed diet during digestion or rapid nail shedding is triggered by another cause.

THESE MINERALS ARE RECOMMENDED FOR YOUR DOG, GET IT NOW.


Medical Condition: Medical condition which may be the reason for a dog’s rapid nail loss may be injuries from infections, diseases or allergies. Each of these will be explained.

A medical condition that may be a major reason for rapid nail shedding, is brittle nails (onychorrhexis). Have you ever tried scrolling through your phone with your nose? This is how a dog with brittle nails feels. Dogs with this condition have nails with little attachment to the nail beds.

As a result, while walking through rough terrains, nail loss is inevitable. Aside from that such dogs are highly susceptible to injuries that bring about bleeding, which may lead to infections.

Another medical condition, vasculitis, where a dog experiences inflammation in its nail, which makes it quite difficult for blood to flow to the nails. As a result of this, the nail becomes weak and easily falls off.

Allergies and other diseases such as viral, bacterial, and parasitic infections best described as autoimmune diseases also lead to nail loss.

While breeds such as German Shepherd, Labrador retrievers, Golden retriever, Maltese, Terries, and Bichon Frise are susceptible to allergies that bring nail shedding.

Hormones and Birth Disorders: Dogs with excessive growth hormones are most likely to have overgrown nails, which easily snag and thus shed. Dogs on the other hand with certain birth disorders may also be plagued with rapid nail shedding.

Dogs who possess these conditions are most likely not to endure pain as such. It is of utmost importance that dogs with such condition are taken to a veterinarian in order to evaluate their conditions and thus recommend a reliable and sustainable medical remedy which will aid such dogs to cope with their conditions. Dogs with cancer also may likely lose nails.

Neoplasia: A condition often seen in dogs, this also may be a reason for rapid nail shedding in dogs. Often assumed to be cancerous, Neoplasia often characterized by tumors or growth is the obvious effect of a cell’s abnormal growth.

Neoplasia may often be the effect of an allergic reaction that presents no medical danger to the affected dog. But in certain cases, Neoplasia which triggers rapid nail shedding may also be the effect of cancer, which requires immediate medical attention.

Aside from the natural nail shedding, we have highlighted a few of the most frequent factors which trigger dog nail shedding. Earlier on, it was stated that when a dog sheds nails naturally, it is oblivious of it.

But when nails are shed due to factors such as nutrition, medical conditions, hormones, and Birth Disorders, dogs exhibit signs which owners often misinterpreted. Highlighted below are few behaviors exhibited by dogs with nails shed unnaturally.

How To Know Dogs That Shed Nails Caused By Unnatural Factors

Limping: Generally, when a dog limps, this is an indication of injury, but this also an indication that it may have shed its nails in a painful way.

In most situations, dogs that limp as a result of nail shedding lost their nails due to medical conditions,  such as autoimmune diseases and allergies.

Swollen Paw: Most likely affected by inflammation of the nails, triggered by vasculitis, dogs with such are often may be affected by birth disorders.

A dog plagued with rapid nail shedding caused by injuries or infection will engage in constant as well as vigorous licking of the affected toenail.

Bleeding: When a dog is plagued with rapid nail loss, often caused by infections, allergies, and injuries, bleeding is often a sign that indicates it requires medical attention.

Most times, bleeding in these circumstances lasts for a really short period. Dog owners may not readily notice this bleeding, but upon keen observation, blood clots on the affected nail may be noticed as well as bloodstains on the floor and in its bedding.

Other signs: that dogs plagued with rapid nail shedding caused by unnatural factors exhibit include furrowed furs, isolation, and sweaty paws. Dog lameness may also be an indication that a dog is experiencing severe nail shedding. This lameness is caused by multiple nail loss on several toes, which caused difficulty in standing.

How To Deal With Nail Shedding In Dogs

Before taking steps in dealing with nail shedding in dogs, it’s is important to know if nail shedding is triggered unnaturally and the specific cause.

If nail shedding is caused by injuries, basic first aid which requires cleaning the injuries will Hydrogen Peroxide and administering Neosporin or an antibiotic ointment.

This should be done three times daily. Ensure your dog does not complicate issues by walking with his injuries exposed.

GIVE YOUR DOG SOME VET RECOMMENDED YUMMY WET FOOD

It is also of utmost importance that medical procedures recommended here should be carried out with the approval of a veterinarian as certain breeds of dogs may not be receptive to this treatment.

I have been getting some questions from visitors and followers concerning the following questions below about Dog shedding their nails, so I will use this section to provide suitable answers to those questions.

Read from the top we have been able to detail that there are many reasons your dog’s nail could fall off or become damaged. Even when that happens most times it’s not a cause for an emergency, but then it is very vital to know that all dogs are not the same in terms of breed, environment, diets, and health-wise. So apart from dog shedding nails which could be natural, nail diseases in dogs can be a leading cause of your dog may shed nails.

So now let’s get answers to frequently asked questions on this topic below.

Why Are My Dog’s Toenails Falling Off?

Trauma or infection can cause this to occur: Even though dogs’ nails are very strong, durable not easily damaged. They are still prone to be shed out, in fact, your dog could have his nails traumatized and that could lead to nail pulling oof or an injury which could set in a secondary infection if not well treated. So an infected toenail may become very brittle and this could lead to falling off of the nail.

What Happens When A Dog Loses A Nail?

If your dog loses his nail due to trauma, there will be mild to severe bleeding depending on how deep the injury is and loss of blood. If the bleeding is severe you may need to visit a vet immediately for proper treatment or Stop The Nail Bleeding Fast By Your Self At Home, if serious.

What To Do When Dogs Nail Falls off?

If your dog has a broken toenail, kindly retrain and call your dog down, then Stop the bleeding under few seconds with Styptic Powder or wrapped the affected foot with a clean towel, applying pressure, and then when the bleeding has stopped you can remove then hanging part of the nail or visit a vet if you can’t do it your self.