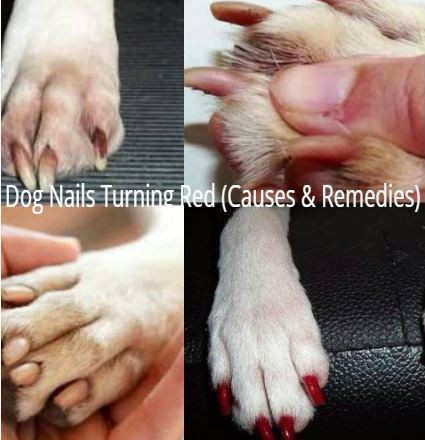 One way to show your dog that you love and passionate about owning him is by caring and regularly checking his nails. But most dog owners hardly examine or may even forget to pay little attention to their pet’s nails and this is entirely wrong.


If you must own a healthy dog, then you must be responsible and caring. Forgetting to check up your canine’s nails could endanger your pet. keeping an eye on your dog’s nails can help you quickly notice when there is a claw disorder such as Nail Discoloration, bacteria or fungal infection.

Dog nails are a vital and useful part of the pet, without the claws, it will be hard for the dog to survive.

Canine nails are there for many useful reasons as I will disclose to you shortly. Once you notice any unusual or abnormal changes to the nail structure and appearance such as the claws turning red at the base, then something is not alright.

But before I tell you what causes your dog nails to turn red, let me quickly highlight Reasons Why Dogs Have Nails.

RECOMMENDED: How To Stop A Dog’s Toe Nail From Bleeding In 5 Seconds

Reason Why Do Dogs Have Nails

Let me start by describing the structure of a dog’s nail so you can understand how they put the nails to use.

Canine nails are curvy and are noted around the end of a dog’s toe. They are made up of a form of protein containing dead cells known as keratin when overgrown they make clicking sound and they come in different colors.

The nail has several tiny blood channels (vessels) and nerves that are embedded in the quick (the sensitive part of the nail).

Before Asking Why Are My Dogs Nails Turning Red, you should be sure to understand that canine nail comes in different colors and also know that most cases of Dog nail color changes are natural and not a cause for alarm.

There are several reasons why your dog has nails.

1. Balance & Traction
Your dog is not slipping and falling because of his nails’ function to maintain his balance. Naturally, pups are structured to get a hold on the ground to avoid falling, this is done by the nails. See Amazing Functions Of The Dog’s Dewclaws.

2. Gripping
Dogs will grip items such as toys, bones solid foods and balance them comfortably in their mouths. They use the nails to grip whatever they are attacking and finally as an external defense medium. Dogs also use their claws to run smoothly in uneven surfaces, nails prevent pets from twisting and injuring themselves.

3. Digging.
A dog can dig out whatever it wishes from the ground using his claws to perform the task. By nature, canine claws are strong enough to withstand wears and tears when that may result from digging.

Dog nails are very tough and strong, but despite that, they are very susceptible to bacteria or fungal infection and other forms of disorders including color change. Secondary toenail infections can set in when dog nails break or get injured, although this may not be a direct reason why your dog’s nail changes color to red (Dog Nail Discoloration).

What You Don’t Know About Dog Nail Colors.

Generall, Dog claw come in different colors, the color variation is related to the appearance of the surrounding hair and skin.

If your pup has Black and brown hair, the nails are meant to be black and dogs with white hair will relatively have white nails. However, some there cases where a dog may be bicolor and that is when dog nail happens to have different (mixed) colors.

Dog Nail Discoloration such as white turning red or changing to other colors. This may be a sign of a health problem in some cases. Without wasting much time lets get to know possible causes of Canine Nail Discoloration.

While many opinions suggest that dog nail color change or discoloration is normal amongst many dogs. Here are the most possible reasons or causes of your dog’s nails turning red.

Fungal infection is caused by the fungal microorganism Blastomyces Dermatitidis. Canine Nail fungus is common in male dogs than females and affects dogs that lead an active lifestyle such as Sporting or working dogs.

Canine nail discoloration is one of the primary signs of fungal infections in dog nails. Though there are many other reasons (such as allergies, age, etc) that are linked to changes in the color of a dog’s claw.

Most people misinterpret this color change that occurs in their pet’s nails and relates it to trauma ( blood is accumulated), leading to nails turning red.

Check up your pup’s nails regularly, observe him very well and if you notice frequent nail chewing or paw licking, it is most likely to be a fungal infection.

I recommended a visit to your vet for a more thorough evaluation of your pet. Red dog nails are a sign of yeast infection and it must be handled without wasting time.

Allergies are reactions caused by the dog’s immune system in response to environmental substances or a range of different materials such as chemicals, food, dust mites, insect stings, etc.

Allergies lead to severe itching, many dogs react by licking and biting their nails or paws because of the irritation. Continues licking of the toe (moisturizing the feet by the saliva) gives room secondary fungal or bacterial infection and if not tackled gives rise to discoloration.

Your pet can be discolored to brown, red, or bronze nail beds as a result and this can be noticed especially well in dogs with white nails.

If you notice that your dog’s nail base is reddish, your pup’s immune system is likely inflamed in response to allergens. Have your pup checked and treated by a vet.

Dog nail over time may become discolored, turning reddish, brownish and sometimes generally pale, or opaque and worse when affected by Fungal infections.

So have your pet’s nails examined regularly by a professional or your self at home and if any unusual color changes make sure to report to a vet for follow up.

RECOMMENDED: How To Trim Extremely Overgrown Dog Nails At Home

Another cause of nail discoloration in dogs is a broken/bleeding toenail. Your pup’s nail may break and start bleeding because they are too long, traumatized or injured during clipping (cutting through the quick).

If a dog’s nail bleeds, if not cleaned and treated, the bleeding may naturally stop and the blood under the nails will clot (Hematoma) and discolored the nails later and the longer it stays.

Saliva Staining Nail Discoloration Results from Claw LickingBlood collection of under the nail can change the color of a dog’s nail from normal to red, brown and black depending on the duration of stay.

to clean up your pup’nails and return the color to normal.

Red staining from saliva can be a sign of an overly acidic system.

Dog Nails Turning Red At Base

A dog suffering from any form of severe nail bed infection could be noticed with claw discoloration at the base.

Signs such as Swelling and redness of the nail base will be noticed amongst others. Nail bed infection could result could be fungal, bacteria and can result from commonly from trauma to your pet’s nails.

Two of prominent Vet Groomers have reacted to the question of dog nail turning red at the base and they wrote:

So, this means dog nail turning brown or red at the base may be caused by a fungal infection, allergies, claw trauma, etc as mention above.

The best way to treat or remedy dog nails that are turning red is by applying the preventive approach and if your pet nails already changed color to red, a curative approach can then be used (and that is by identifying the root cause and then getting it treated).

Recall that dog nail discoloration to red may be due to aging, fungal infection, broken toenail, blood clot or nail bleeding, allergy and saliva staining, etc. Early prevention of these or later treatment is the remedies to canine nails turning red.

First, you must keep a close watch on your pup’s nails to note when there are sudden changes to his claws. And once discoloration is noticed, quickly report to your vet to have your dog examined so that the cause can be established and treated properly.

Here Are Some Things You Should Do To Keep Your Dog Nails Color Healthy.

1. Detect Yeast Infection early and treat it with the right steps and medications.
2. Trim your dog’s nails regularly to keep them short, doing this will prevent the nails from splitting or breaking. Overgrown nails will lead to broken or damaged toenails, severe bleeding and pain.
3. Get help from your vet, identify symptoms of allergies in your dog and treat properly.
4. Clean your pet messy paws, nails & feet regularly to clear specks of dirt and saliva stains that could discolor the claws. Here is a magical way of cleaning your Dog’s Nails, Buy cheap Healthy Nail cleansing Agent, It is highly recommended to maintain your pet’s claws. 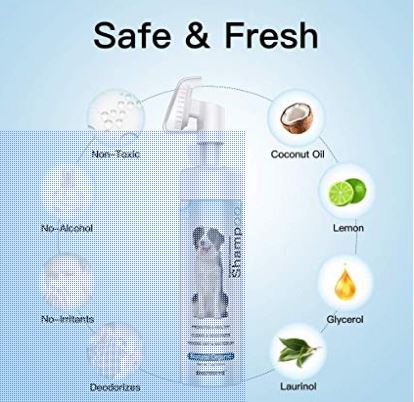 If your dog’s one, two or more nails look blood stained from the inside, probably a situation where the nailbed is oozing blood or may be the claws appear to be splitting, then that could be likened or related to (SLO) symetrical lupoid onychodystrophy or an auto immune disease of the nails.

Most dogs even at age 3 some owners had reported got SLO, although no nails were lost, apart from one which turned dark colored (discoloration). The remaining ones were not affected and are clear. But this one, which I thought had blood in it was only developing pigment.

Reddish Dog Nail discoloration outside being caused by injuries and splits could be a primary indication for fungal infections in dog claws. Yes, we know there could be other reasons such as age allergies and trauma for this color change but one way to find out is to have a schedule with your vet. Red claw are highly related to sign of yeast infection so a vet will take history of your dog and have him examined to establish the cause of the discolored nails.

Carefully observing your pup at home could go a long way to help you determine whether it is an infection. You could notice frequent paw licking and chewing, this should most likely point to fungal infection.

My Puppy’s Nails Turns White (How Can I Prevent This?)

After identifying the causes of claw disorders in puppies, it would be easier to prevent them. To avoid disease causing parasites which may cause claw disorders to a pup, its environment must be kept clean at all times. Regular washing of the paws and claws and washing after each walking session is encouraged.

Nail clipping is also important in the overall foot health of the puppy in order to keep the claws’ length under control; an overgrown claw may tear and cause injury to a puppy or make movements and standing uncomfortable.

A puppy must be well-fed with all the essential nutrients present in its feed. For 1st time owners, animal nutritionists and vets may be sorted for to learn more about animal dieting. In as much as a dog should be properly fed, its consumption rate and reactions to every food must be well documented by the owner in case of a food hypersensitivity occurrence.