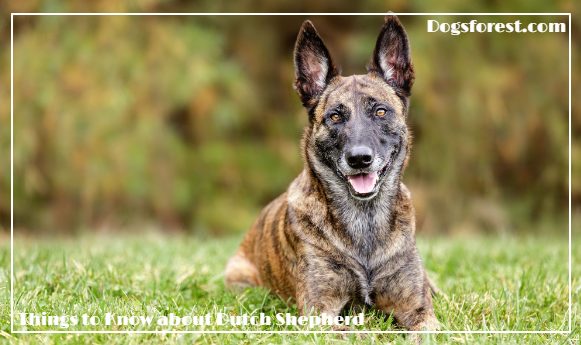 While the Dutch Shepherd is not as well-known as other of its Shepherd cousins, they are one of the healthiest and easiest to teach Shepherd dogs.

Behind their almond-shaped brown eyes lies a lifelong buddy who is devoted, dependable, and affectionate.

This vivacious and energetic dog is ideal for any active household with children or for sports singles.

Unlike other dog breeds, the Dutch Shepherd retains a strong resemblance to its 1800s predecessors; continue reading Dutch Shepherd Growth Chart to know why.

When Do Dutch Shepherds Stop Growing?

It’s difficult to imagine a cuter dog than a Dutch Shepherd puppy. These puppies appear to be composed entirely of ears and tails joined by an endearing little fluffy body!

However, Dutch Shepherds are not for everyone. As one of a small number of “naturally occurring” dog breeds (which we shall discuss in greater detail in subsequent parts), Dutch Shepherds unquestionably have an “ideal owner.”

Additionally, the ideal owner for a Dutch Shepherd realizes that puppyhood does not end abruptly when your dog reaches the age of one. While this is a significant milestone, it is not the most significant in the history of the Dutch Shepherd dog breed.

Dutch Shepherds reach complete maturity at about two years of age, however, the maturation process can last up to another year.

What is the Standard Dutch Shepherd Size

They are medium-sized dogs, with males growing to a maximum height of 24.5 inches. Females are typically a half-inch or two shorter than males. Both sexes weigh between 40 and 75 pounds on average.

Here is the weight chart of a Dutch Shepherd:

A typical 8-week-old puppy should weigh between 11 and 17 pounds and should not exceed 9 inches in height. They are typically fully developed by the age of two and mentally mature by the age of three.

At six months, they should weigh between 24 and 35 pounds (pounds).

A female Dutch Shepherd should weigh between 39 and 63 pounds at the age of one (pound).

One of the many characteristics that Dutch Shepherd owners adore about their athletic, active dogs is their lack of bulk.

According to the American Kennel Club (AKC), the Dutch Shepherd is a medium-large dog.

The Dutch Shepherd normally weighs between 42 and 75 pounds, although this can vary slightly depending on the size of the dog’s parents.

Additionally, a Dutch Shepherd dog is a slender breed, rangy and tall, with thin legs and tail and a body suited for running, jumping, and herding, even in puppyhood.

How To Weigh Your Dutch Shepherd Puppy?

If you want to maintain track of your Dogue de Bordeaux’s weight, you must first learn how to weigh him properly.

To begin, you should be able to weigh your Dogue de Bordeaux at home if he is a puppy or if you are just large enough to hold him. This can be accomplished with a standard bathroom scale.

Unless there is a health problem, you can weigh an adult Dogue de Bordeaux once every six months. Once a week is sufficient for a puppy to ensure he is growing normally.

What Is A Dutch Shepherd’s Neck Size?

How Big Do Dutch Shepherds Get?

Male Dutch Shepherds are slightly larger than females on average, standing between 22 and 25 inches tall, while females stand between 21 and 24 inches tall.

In comparison to other German Shepherd breeds, the Dutch Shepherd has the fewest health problems. This is due to its scarcity and rigorous breeding laws, which result in a small number of genetic disorders.

However, considering they are members of the Shepherd breed family, the primary concern should be hip dysplasia.

Eye problems such as Gonio Dysplasia are conceivable; this is a condition in which a buildup of fluid within the eye can result in blindness in severe cases.

Another common eye problem is Pannus, which is characterized by a grey-pinkish film covering the eye and can end in blindness if left untreated.

Usually, having a lot of energy entails a lot of running and eating!

The Dutch Shepherd, as an energetic dog breed, demands a well-balanced, high-protein diet. This can be accomplished through the use of high-quality dry food made specifically for medium-sized athletic dogs.

They’ll consume between three and four cups of kibble daily. Puppies require four meals each day, evenly distributed throughout the day, to minimize bloating. At six months, this can be lowered to three meals, and at twelve months, to two meals. Three cups of dried food divided between two meals is sufficient once fully grown.

Dutch Shepherds require a variety of stimuli, both mental and physical. Their preferred form of exercise is running, running, and running some more!

Combine this with a purpose or mental stimulation, and you may be able to exhaust them. Spend at least 30 to 60 minutes a day playing frisbee, fetch, or flyball. Extensive walking, running, and trekking are also excellent types of exercise.

At What Age Is A Dutch Shepherd Fully Grown?

Dutch Shepherd dogs are fiercely loyal and form strong bonds with their owners and families.

Bear in mind that their loyalty, combined with their superior intelligence, might result in uneasiness and boredom if left alone. Therefore, consider doggie daycare if you want to leave them for extended periods of time.

How Long Are Dutch Shepherds Pregnant?

How Many Puppies Do Dutch Shepherds Have?

What Is The Life Expectancy Of Dutch Shepherds?

A Dutch Shepherd’s average lifespan is between 8 and 15 years. Hip Dysplasia is a devastating orthopedic ailment that, as animal ages, progresses to persistent osteoarthritis. X-rays can be used to detect it, and infected animals should be removed from the reproductive pool. Around 5-8 percent of the Dutch Shepherd population is believed to be affected by this illness.

How Much Does It Cost To Own A Dutch Shepherd?

If you are considering adopting or purchasing a Shepherd dog, make certain they have not been crossed with another Shepherd dog, as they might seem quite similar to their cousins. They should always be dressed in brindles.

The cost of adopting a Dutch Shepherd is approximately $300 to cover the costs associated with caring for the dog prior to adoption. Purchasing Dutch Shepherds from breeders, on the other hand, can be unreasonably expensive. They typically cost between $1,000 and $3,500, depending on their breeding.

Begging is not necessarily motivated by a desire for more food; it is also used to gain attention. (And, by rewarding the behavior, you reinforce and encourage it to continue.) If your dog begs, do not automatically assume he is hungry. Trust your instincts and keep track of the date and time of your last meal. If your dog is prone to begging and you are prone to succumb to those puppy dog eyes, choose a high-protein meal with a fiber blend to help control your dog’s hunger and voluntary food consumption. In this manner, you may feed your dog with the assurance that he will feel fuller and content for a longer period of time.

These adorable dogs certainly demand plenty of activity, but they are also quite intelligent and easy to train, which means that anyone willing to put in the work will develop a strong and enduring attachment with them.

Dutch Shepherds are a gentle and playful breed that will fit in wonderfully with any family’s active lifestyle.

With a lovely temperament and a stunning brindle coat, you can be certain they will stand out in the dog park for all the right reasons!

At what age does a Dutch Shepherd reach maturity?

A typical 8-week-old puppy should weigh between 11 and 17 pounds and should not exceed 9 inches in height. They are typically fully developed by the age of two and mentally mature by the age of three.

How much food should a Dutch Shepherd consume on a daily basis?

Dutch Shepherds require between two and three cups of high-quality dry dog food each day, depending on their size, weight, and activity level.

What is the difference between a Dutch Shepherd and a Malinois?

Dutch Shepherds, like Belgian Malinois, were bred for work. According to the AKC, these Dutch dogs are capable of distinguishing between work, play, and downtime. Again, similar to Malinois, they desire to fulfill a higher function than that of a household pet.