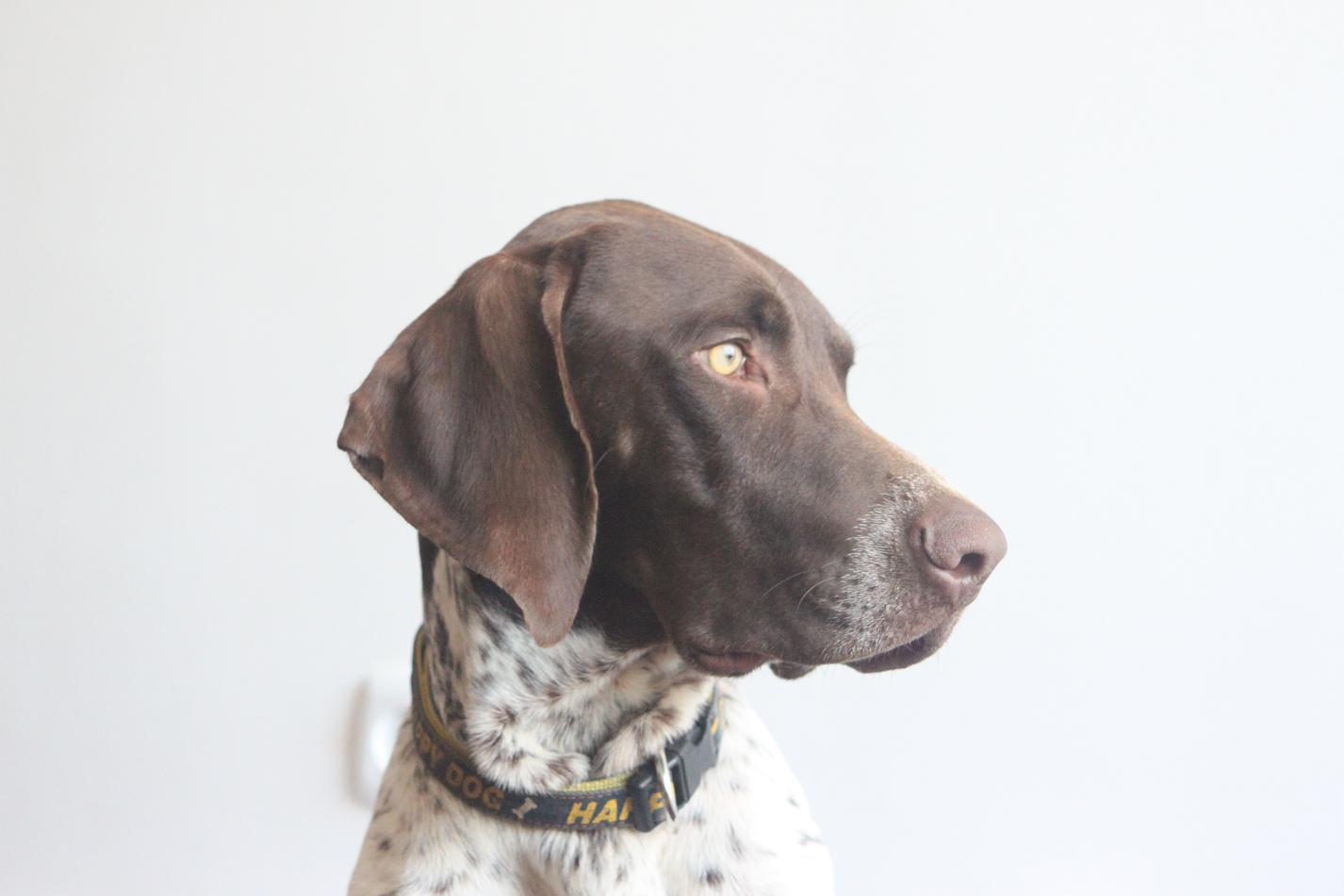 German shorthaired pointer dogs are an energetic breed characterized by their speed, strength, agility, and endurance.

While caring for these dogs is not difficult, it is critical to monitor their growth. To this purpose, we’ve produced a growth chart for the German Shorthaired Pointer.

German Shorthaired Pointers have an elegant appearance and an exceptionally loyal disposition. These canines excel at hunting all types of wildlife and require plenty of exercise.

They have a kind disposition and may be trained with sufficient supervision. They are excellent family pets and are capable of running, swimming, and participating in a range of dog activities.

To know more about German Shorthaired Pointer growth chart, make sure to read the entire article!

A German Shorthaired Pointer is considered fully matured at the age of two. Physical growth in pointers typically ceases between 1.5 and 2 years of life, but cognitive growth typically occurs between two and two years of age.

By their age, you can typically learn a lot about the growth, physical limitations, hunting abilities, and cognitive development of a German Shorthaired pointer.

As a dog owner, you should be aware of the length of time required to obtain a fully grown dog and the developmental stages that occur throughout that time.

You should also be aware of what it takes to keep them healthy and happy.

What is the Standard German Shorthaired Pointer Size

According to the American Kennel Club, fully developed German shorthaired pointer males should stand between 23 and 25 inches tall at the shoulder. This is around 24 inches on average.

Female pointers range in height from 21 to 23 inches, with an average of 22 inches. Pointer dogs that are even slightly taller or shorter than this norm are “heavily penalized” for display purposes.

Here is the weight chart of a German Shorthaired Pointer:

German Shorthaired Pointers are born in a vulnerable situation due to their inability to care for themselves. They are completely reliant on their mother for warmth, comfort, and nutrition.

Newborn puppies, who are prone to fever, require an ideal temperature to survive. They cuddle up to their mother, but are unable to walk because of their underdeveloped muscles.

Puppies require this time with their mothers to grow.

Between 3 and 12 weeks of age, your German Shorthaired Pointer will undergo numerous changes as their muscles strengthen.

They are totally weaned between 5 and 12 weeks of age and have a complete set of needle-sharp teeth. The majority of mothers would wean them on their own.

The German Shorthaired Pointer puppy will experience teething during this time.

At six months of age, the female German Shorthaired Pointer weighs on average between 14 and 19 kg.

At six months of age, the German Shorthaired Pointer male weighs on average between 18 and 23 kilograms.

At one year, a female German Shorthaired Pointer weighs between 20 and 26 kilograms, while males weigh between 24 and 31 kilograms.

Around 6-12 months of age, your German Shorthaired Pointer will be in heat. Typically, it occurs between the ages of 6 and 12 months.

The heat cycle lasts approximately 21 days, and while females are viable during this period, it is not recommended that they give birth before the age of two.

Because they have not completed their development, young puppies are not emotionally or physically prepared to give birth.

German Shorthaired Pointers weigh between 45 and 70 pounds. They are tall and also have a very huge stature.

What is the Full Grown German Shorthaired Pointer Weight?

How To Weigh Your German Shorthaired Pointer Puppy?

If you want to maintain track of your German Shorthaired Pointer’s weight, you must first learn how to weigh him properly.

To begin, you should be able to weigh your German Shorthaired Pointer at home if he is a puppy or if you are just large enough to hold him. This can be accomplished with a standard bathroom scale.

Unless there is a health problem, you can weigh an adult German Shorthaired Pointer once every six months. Once a week is sufficient for a puppy to ensure he is growing normally.

What Is A German Shorthaired Pointer’s Neck Size?

How Big Do German Shorthaired Pointers Get?

Your GSP should be 3/5 or 5/9, with the waistline and abdominal tuck apparent. Additionally, their ribs are palpable due to a thin layer of fat covering them.

If your dog is either underweight or obese, bring them to the veterinarian for assistance in regaining a healthy weight.

When it comes to the growth of a German Shorthaired Pointer, hereditary factors play a significant role.

These genetic variables, in conjunction with other significant aspects that contribute to their development, determine their pace of growth.

The type of nutrition your German Shorthaired Pointer puppy receives will have an effect on his ability to grow.

If you continue to feed your dog low-quality food that is deficient in the vitamins and minerals he requires to grow, his development will be harmed.

There are low-quality diets that are deficient in nutrients and are packed with fillers that provide little or no nutrients required by a developing dog. They actually stunt your dog’s growth.

German Shorthaired Pointers are prey-oriented dogs. They will become bored and may do mischief if they do not receive enough exercise. Sufficient exercise is necessary to promote growth and allow for the development of bone density.

Stronger bones and a fitter body will help your puppy gain weight while remaining healthy. When your German Shorthaired Pointer is permitted to exercise on a regular basis, he will develop healthy, powerful muscles.

At What Age Is A German Shorthaired Pointer Fully Grown?

By half-year of age, male puppies weigh an average of 39-49 pounds (18-22 kg), while female puppies weigh 33-42 lbs (15 kg-19 kg). After six months of age, growth significantly decreases. Many of the puppies are already close to adult size at this stage.

They will use a large portion of the calories they obtain in the future to bulk up. While the puppy will continue to require a high caloric intake, the frequency of feeding can be reduced.

Divide the daily quantity into three portions until the sixth month, at which point you can move to twice daily. Between 1.5 and 2 years of age, a German Shorthaired Pointer matures into a fully-fledged adult.

In general, the GSP will stop growing after the 18th month but may gain a few pounds. The cognitive development continues, and some puppies exhibit an abrupt onset of stubbornness, which is most likely related to their teen phase.

How Many Puppies Do German Shorthaired Pointers Have?

A German Shorthaired Pointer litter typically contains between 8 and 12 puppies, however, smaller and larger litters are both expected.

What Is The Life Expectancy Of German Shorthaired Pointers?

How Much Does It Cost To Own A German Shorthaired Pointer?

The typical cost of owning a German Shorthaired Pointer is between $500 and $1000 per year, with the average being around $800.00.

This amount would cover all costs associated with food, training, veterinarian visits, toys, and immunizations.

Due to their shorter hair, German Shorthaired Pointers require less care than a much fluffier dog. However, because they are medium-sized dogs, they require additional food, activity, and training.

How long does the German Shorthaired Pointer take to mature?

Between 1.5 and 2 years of age, a German Shorthaired Pointer matures into a fully-fledged adult. In general, the GSP will stop growing after the 18th month but may gain a few pounds.

As the name implies, pointers naturally utilize their body to point when they locate a game. They droop their heads, maintain a steady look, and lift one of their front paws, resembling an arrow pointing hunters in the direction of the prey.

How do you determine whether your GSP is too lean?

German shorthaired pointers have a high level of energy, which can result in severe leanness, particularly in working dogs. If you can see through your dog’s coat to his ribs or spine, he is too thin. Increase his daily rations by 1/2 cup and switch him to a high-quality, high-protein meal.