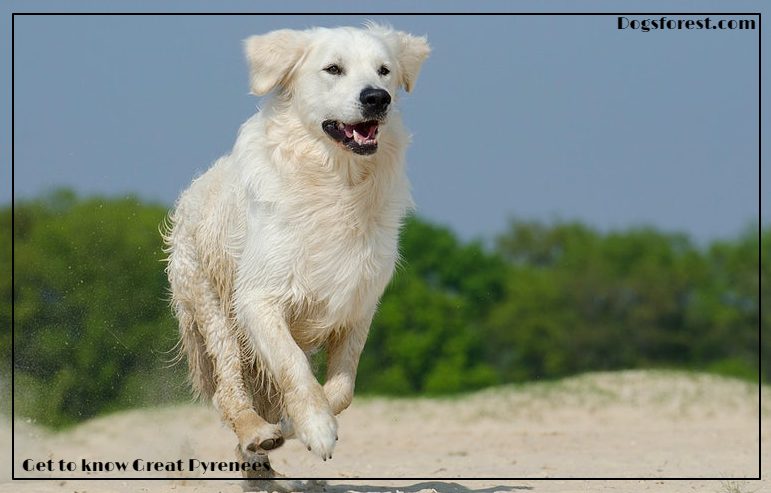 The Great Pyrenees — often referred to as Pyrenean Mountain Dogs or “Pyrs” — are large, attractive dogs with thick, white coats. The breed is named after the snow-capped Pyrenees mountain region that separates France and Spain and was originally designed to defend livestock from predators.

Although the Great Pyrenees’ regal stature aids in the protection of cattle, these gentle giants have a calm demeanor and affectionate disposition that has earned them a place in the hearts of many pet owners worldwide.

When Do Great Pyrenees Stop Growing?

A frequently asked question is when the Pyrenees stop growing. After all, they are enormous dogs. By the time your dog reaches his first birthday, he should have attained around his full height.

He is expected to continue gaining weight and filling up until he is 18 – 24 months old, but the majority of his growth should occur prior to his first birthday.

It is advisable to use a growth chart to ensure that your dog is developing at a healthy rate. Consult your veterinarian if you have any concerns.

What is the Standard Great Pyrenees Size

When fully grown, the normal Great Pyrenees will stand between 25-32 inches tall and weigh between 85-160 pounds (38-72 kg). They often grow to their full size over a period of up to two years. Males are generally larger than females, yet both are classified as extra-large breeds.

Here is the weight chart of a Great Pyrenees:

A Great Pyrenees puppy will typically weigh around a pound at birth. They do develop swiftly, and should reach a weight of 2 pounds within a week.

In two weeks, they should have gained at least three pounds. Large breed dogs typically acquire weight rapidly, and you should not be surprised to see some major rapid growth immediately. At this age, they will still be nursing on mother’s milk.

By the age of three weeks, your puppy should weigh approximately four pounds. By the time your dog reaches the age of 12 weeks, he should weigh between 30 and 40 pounds.

They should gain about 2.5 pounds each week on average, although this can vary depending on the dog and whether it is a male or female Great Pyrenees. While the rapid growth may surprise you, keep in mind that these are enormous dogs.

At six months of age, a male Great Pyrenees weighs between 70 and 80 pounds. A six-month-old female Great Pyrenees, on the other hand, will weigh between 50 and 60 pounds. Males and girls will both require significant additional growth before reaching adult size.

When your dog is seven months old, he should be significantly larger. A 7-month-old puppy’s weight should be between 59 and 81 pounds. Although the dog is not yet completely matured, he is obviously growing in size.

By the time he is a year old, his weight will have stabilized. At one year, the range is 75 to 109 pounds. Even yet, this is a highly improbable final weight for your dog.

Your dog’s final adult weight should be approximately 18 months. The Great Pyrenees can reach a final weight of between 82 and 124 pounds, however these are only averages.

He may be larger or smaller than average, depending on his genetic predisposition for weight gain or loss. You do not want to allow your dog to expand beyond his development curve, since excess weight might be detrimental to his joints.

What is the Full Grown Great Pyrenees Weight?

The Great Pyrenees are considered to be a huge breed. The breed standard specifies a typical and average size range of 25-32 inches in height and 85-160 pounds in weight.

The height difference between a fully developed female and male Great Pyrenees is minimal. Males, like many breeds, are slightly taller than females, although only by an average of 2 to 3 inches.

How To Weigh Your Great Pyrenees Puppy?

If you want to maintain track of your Great Pyrenees’s weight, you must first learn how to weigh him properly.

To begin, you should be able to weigh your Great Pyrenees at home if he is a puppy or if you are just large enough to hold him. This can be accomplished with a standard bathroom scale.

Unless there is a health problem, you can weigh an adult Great Pyrenees once every six months. Once a week is sufficient for a puppy to ensure he is growing normally.

What Is A Great Pyrenees’s Neck Size?

How Big Do Great Pyrenees Get?

A mature Pyrenean Mountain Dog, according to the AKC, should have a muscular body beneath its thick coat, with a short, strong neck, a somewhat deep chest, and a long tail that hangs low to the ground. This breed is distinguished by its graceful movement and magnificent appearance.

Veterinarians utilize the Body Condition Score to determine a dog’s fat content in order to develop an exercise and food program that is appropriate for your puppy’s activity level, body type, and lifestyle. BCS has two scales: 1-5 and 1-9.

A Great Pyrenees with a healthy weight should have a BCS of 3/5 or 5/9. This is when you can feel your puppy’s ribs with your fingers through a thin coating of fat.

Genetics will play a role in determining the size of your dog. While he will always be a large dog, his size will vary.

While there is no perfect size for a Great Pyrenees, there are certain averages that might assist you in determining the proper size for your dog. Genetics will make this determination for you. Whatever food you feed your dog, you will never be able to overcome his DNA.

Nutrition will undoubtedly have an impact on your puppy’s growth. You’ll want to feed your dog high-quality puppy food to ensure that he grows as quickly as he should.

Overfeeding your dog will not grow him taller, but it will put undue strain on his joints and increase his risk of hip dysplasia. It is critical to monitor your dog’s growth.

You’ll want to ensure that your puppy receives adequate exercise while he’s a puppy to ensure he grows to be as muscular as you like.

You also do not want to over-exercise your puppy, so pay attention to his indications about when he needs to rest. Never overburden him, but ensure he gets enough outside playing to stay healthy.

At What Age Is A Great Pyrenees Fully Grown?

As a big breed, the Great Pyrenees has slower growth stages and requires more time to mature than most dogs. Your puppy should reach full size around their first birthday, although most Great Pyrenees puppies mature and fill out their chests over a two-year period.

How Long Are Great Pyrenees Pregnant?

How Many Puppies Do Great Pyrenees Have?

What Is The Life Expectancy Of Great Pyrenees?

How Much Does It Cost To Own A Great Pyrenees?

When considering adopting or purchasing a Great Pyrenees, it’s important to prepare ahead financially so that the pet does not become a financial burden on you or your family later on. You should include in not only the cost of the dog, but also the cost of training, food, supplies, veterinarian fees, grooming, and other additional charges. To assist you in budgeting for your new dog’s arrival, we’ve created a cost calculator that will provide an accurate idea of the cost of raising a Great Pyrenees.

These figures cover the cost of materials, training, medical bills, food, treats, grooming, licensing, and microchipping. Additionally, depending on your lifestyle and personal preferences, you may incur optional charges such as spaying/neutering your dog, enrolling in a pet insurance plan, hiring a dog walker, or boarding your furry buddy. All of this adds out to a total cost of ownership of between $71,145 and $194,620.

What is the size of a six-month-old Great Pyrenees?

How large will my Pyrenees grow to be?

When fully grown, the normal Great Pyrenees will stand between 25-32 inches tall and weigh between 85-160 pounds (38-72 kg). They often grow to their full size over a period of up to two years. Males are generally larger than females, yet both are classified as extra-large breeds.

How many cups of food should a Great Pyrenees consume on a daily basis?