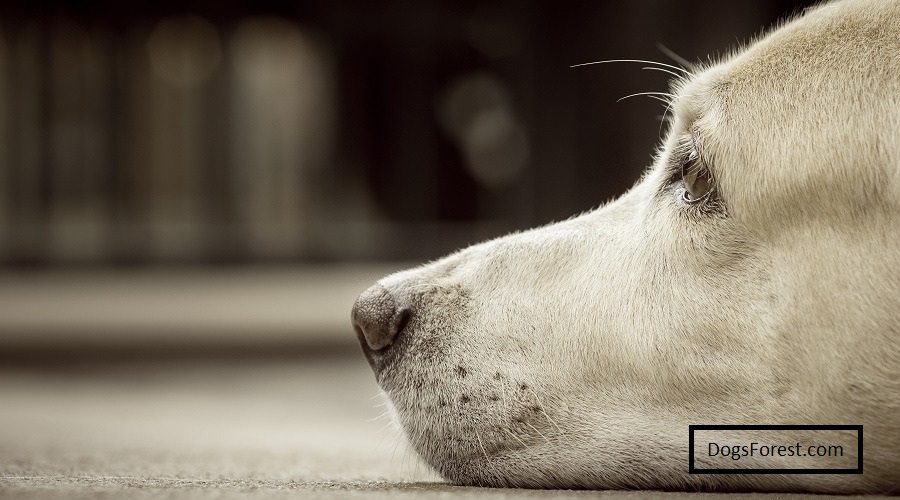 While nail-biting is generally dismissed as a simple poor habit in people, it can indicate something more serious in dogs.

Dogs are sophisticated creatures who, from time to time, will groom themselves.

Consistent biting, on the other hand, could indicate that your dog is unhappy or suffering from a health problem.

If you detect your dog gnawing or licking at his or her nails, you must intervene to prevent the problem from worsening.

The first step in addressing unwelcome nail-biting behavior is to figure out why they’re doing it in the first place.

Is chewing on a dog’s nails harmful?

Many dogs chew their nails on occasion.

But if your dog chews his toes or claws on a regular basis, he may have a medical or behavioral problem.

Nail biting should be handled with your veterinarian because it can cause bleeding and subsequent illnesses.

Reasons Why Dog Bite His Nails

It’s all too easy to forget to cut your dog’s nails.

When they start to suffer inadvertent scratches, many owners know it’s time to replace them.

However, it’s critical that you stick to a tight grooming schedule to keep your dog’s nails under control.

Their nails develop quickly and may begin to curl inward toward their paw.

Walking and running will become excruciatingly uncomfortable as a result of this.

When your dog becomes aware of the discomfort, he or she may bite at their nails to alleviate the situation.

In an attempt to grind them down, you may see a lot of pawing on the ground.

It’s preferable to take them to a professional groomer or execute the nail trimming or nail clipping task for them.

Your dog nails will be even, smooth, and healthy as a result of this.

See also  Why Are Dog Nails Splitting? (The Truth)

To avoid overgrowth and chewing, you should have your dog’s nails cut on a regular basis.

In the long run, regular clippings will make the process easier because your dog will become accustomed to the sensation.

It will also aid in keeping the quick down so that you do not experience any unnecessary nail bleeding.

Reason 2 : Damage to the body

You know how inconvenient it is to deal with a broken nail if you’ve ever had one.

When their nails become damaged, dogs will do the same thing.

Depending on the severity of the break, the problem could cause them a lot of discomfort.

If this is the case, clippers should be used to remove the broken section rather than allowing them to bite it off.

Bacteria in your dog’s mouth can cause an infection that is possibly fatal.

If your dog has frequent breaks, they may have a disorder called Symmetrical Lupoid Onychodystrophy, or SLO.

This problem can drive your dog insane, and it will require medication to resolve.

SLO is an autoimmune disorder in which the body attacks the nails.

The nails will be treated as a foreign intruder by the immune system, cutting off circulation and critical nutrients.

As a result, they will begin to break or entirely lift off.

Because your poor canine pet has no idea what’s going on, they’ll begin to gnaw at their nails with ferocity.

If this happens, you should take your dog to the veterinarian right away.

A competent veterinarian will be able to diagnose the problem and provide medicine to help you manage it.

Allergies affect dogs in the same way they affect humans.

The key distinction is that they are not protected in the same way that we are.

If your dog is allergic to something outside, it will be transferred to their paws as soon as they go outside.

Anything from pollen to grass can fall within this category.

When they make contact, the skin on their paws may become inflamed and irritated.

To relieve the pain, your dog will begin to chew their feet furiously.

It’s possible that they’re attempting to reach the skin between the toes or on the paw.

Their nails may have become entangled in the commotion.

If left untreated, your dog’s teeth might become so worn out that they bleed.

This can lead to an infection that you don’t want.

It is advised that you take your dog to the veterinarian for an allergy test and treatment plan.

Many of the symptoms of an infection are similar to those of an allergic reaction.

You may even detect discharge at the infection site in severe situations.

Infections in dogs can come from a variety of places.

They can become infected with fungi through decomposing wood or diseased soil.

It’s a rather common event, given their proclivity for digging in smelly soil.

Bug bites, for example, are a common source of bacterial illnesses.

When an infection strikes, it spreads swiftly.

The ideal setting for development is your dog’s paw.

Fortunately, with the right antibiotics, infections are relatively simple to treat.

Many of the reasons why people bite their nails can also be applied to dogs.

Dogs are complicated creatures who go through the same spectrum of emotions as humans.

To cope with tension or uneasiness, dogs may begin to gnaw their nails.

It’s a way for them to cope with the situation and find solace.

Alternatively, they could be doing it simply to pass the time.

In either case, the nail-biting is a reaction to how they’re feeling, therefore you should address it right away.

Nail-biting is frequently accompanied by other undesirable behaviors.

Chewing on various items throughout the house, continuous barking, and accidents are all examples of this.

Nail biting or paw licking usually occurs after you’ve left them alone for the day.

It’s a good idea to provide them with activities that will keep them occupied and entertained.

There are a variety of fantastic toys available that are meant to keep their minds stimulated and prevent boredom or anxiety.

How to Stop Biting Your Nails

It’s usually not a cause for concern if your dog chews on his nails every now and then.

You should only interfere if the situation becomes a long-term issue to avoid dog bite.

If they begin to bite their nails on a regular basis, you must determine the source of the problem and take appropriate action.

See also  Overgrown Dog Nails : What To Do? [Answered]

Your veterinarian will be able to assist you in identifying the underlying causes and making advice for how to put an end to it.

In most circumstances, addressing the root of the problem will result in the behavior ceasing.

In the interim, you might want to put up a physical barrier to prevent your dog from chewing on his or her paws.

Collars that inflate or that are used after surgery can be extremely beneficial.

Your canine buddy will be unable to reach their paws as a result.

Of course, they’ll still be uneasy, so you’ll have to deal with the issue.

To provide some relief, you might clip their nails and clean the area.

Warm water and antiseptic soap will do the work.

To avoid future problems, make sure the paw is completely dry.

To remove all of the surplus moisture, utilize a drying power.

Dogs do not bite their nails on a regular basis.

You should interpret the behavior as a call for assistance and offer your dog with the necessary care or nail clip the dog’s nail using nail clippers.

Once you’ve addressed the underlying cause of their biting, your dog shouldn’t be tempted to bite again.

How can I get my dog to stop chewing his nails?

Boredom might sometimes cause a dog to gnaw on his nails.
If you have to leave your dog alone throughout the day, make sure they have lots of toys to keep them entertained.
Before you leave for work, you might want to take your pet for a walk or a run around the yard.

Why do dogs bite their nails and lick their paws?

Airborne allergens, like humans, can cause severe itching.
To relieve atopy itching, dogs lick and gnaw their paws.
When dogs have itch-inducing allergies, they may bite their nails to relieve the itching.
Other allergic reactions, such as those caused by food allergies, can also cause same behaviors.

Why do dogs chew their toes?