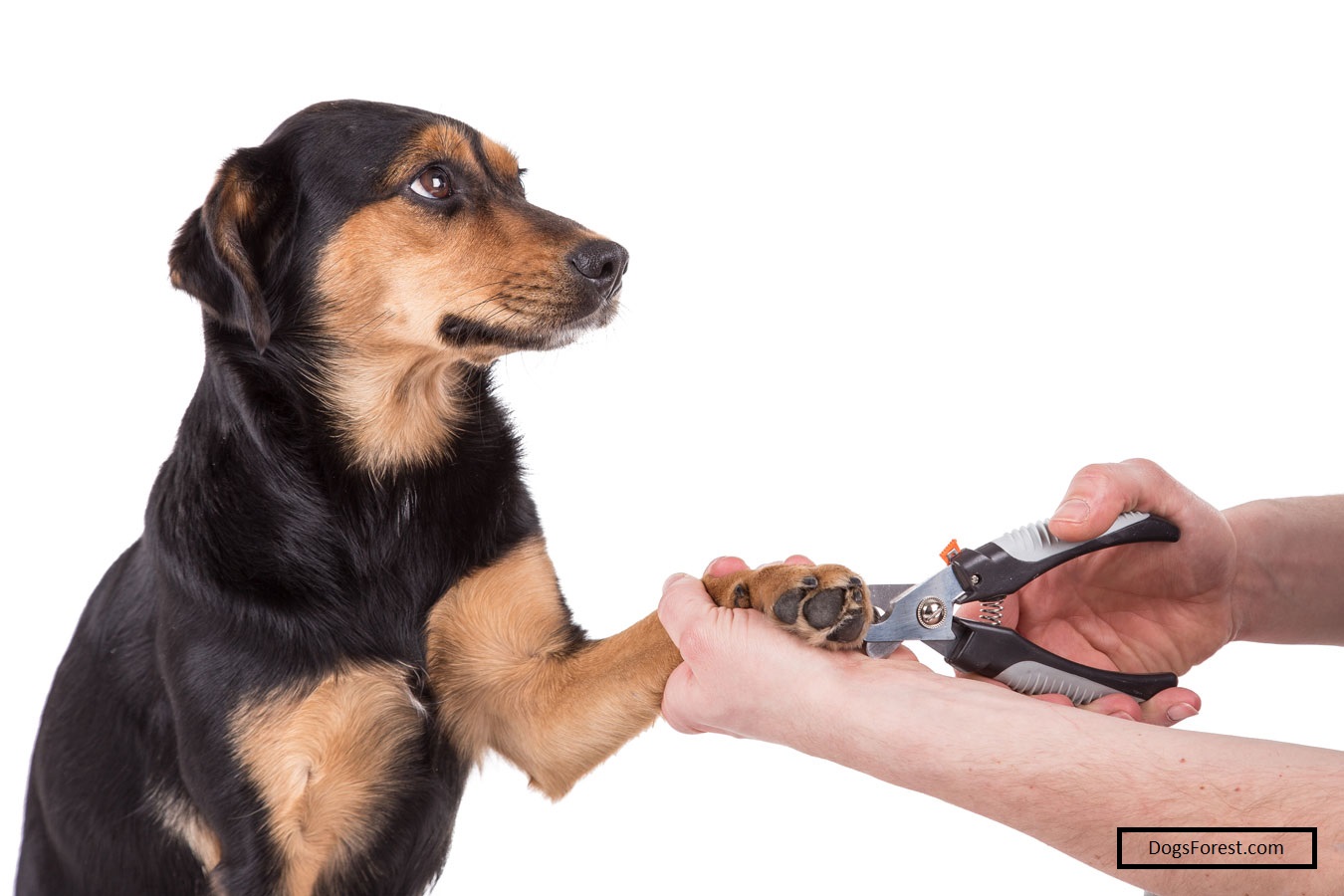 Many individuals have pets who refuse to get their nails clipped by their parents.

Though nail trims aren’t anyone’s idea of fun, they can be a nightmare if you have a dog who is terrified of them.

There are ways to make nail trimming less difficult.

Use a different model of nail clipper or a Dremel instead of a clipper to desensitize your dog to it.

If a dog is highly aggressive and you’re scared they’ll bite you, the best place to start is with your primary veterinarian.

If your dog is scared or squirmy but not violent, try at-home methods such as enlisting the support of another family member.

You may also nail trim your dog’s nails without using clippers.

It’s far more easy to clip your dog’s nails at home if you can persuade them that they aren’t as awful as they think.

Even if you still bring your dog to get their nails trimmed, it’s a good idea to get them used to the procedure for both their sake and the safety of the person conducting the trimming.

What Are the Causes of Dogs To Refuse to Have Their Nails Trimmed?

Let’s look at some of the reasons why dogs dislike nail trimmings and how we may help them get over it.

You could damage your dog accidently if you don’t know how to cut your dog’s ingrown nail.

It’s advisable to get advice from an expert, such as a member of your veterinarian’s staff or a reputable groomer.

What Kinds of Nail Trimming Tools Are There?

This is the approach we take.

I feel like I have more control over the trimmer, and my dogs prefer the scissor technique to the guillotine style.

The scissor method can cut the nails from top to bottom or side to side.

The blade that comes up from the base of the trimmer is to cut the nail off.

A nail grinder is a small electric sander that grinds and forms nails.

The nail grinder works better for some dogs than a regular clipper, although it takes longer.

Be advised that some dogs are bothered by the vibrations and sounds produced by the grinder.

It’s critical to use a nail grinder designed specifically for trimming a dog’s nails, rather than a craft or industrial one.

An industrial grinder might be overly strong, making it difficult to maintain the necessary level of control.

Powder to stop the flow of the blood

A blood clotting powder should always be kept on hand like styptic powder.

A dog’s nail can be clipped excessively short by even the most professional groomer.

Without it, I never start clipping the dog’s nails.

Regardless matter which tool you prefer, it is critical to keep it in good working order.

Sharp blades are required for the clippers.

A dull nail clipper blade is the equivalent of using a butter knife instead of a steak knife.

Your dog may experience discomfort if you use a dull blade.

Maintenance for the nail grinder is changing the Dremel bit when it wears out or ensuring the sanding disc is in good shape and changed as needed.

Allow Your Dog To Take It Easy First

As the dog owner ,make sure your dog is familiar to you stroking and holding her paws before introducing him or her to the nail clipper.

Because some dogs aren’t used to it, it’s critical to train them.

You can begin by gently caressing the shoulder. Make sure your dog is relaxed and comfortable at all times.

Treats are a great way to lift her spirits and relax her muscles.

If your dog is still relaxed after the shoulder contact, work your way down the legs and eventually to the paws.

Take some time to observe her mood and behavior at each phase to ensure that she is still relaxed.

You can now try to hold her paws in your hand.

You’ll need to hold her paws for a long during each overgrown dog nails cutting session, so she should get used to it.

Once you’ve mastered gripping her paws, try touching her nails.

The final step is to apply pressure to her long nails by pressing them together.

The purpose of this is to simulate the pressure used during trims so that your dog is already accustomed to it when you conduct the actual trimming.

Introduce your dog to the clipper

Again, your dog could not be used to the clipper yet.

Before you begin clipping her nails with the nail clippers, you must first introduce the clipper to her.

Present the clipper to her for the first several times, then give her treats.

You’re forming a positive bond between your dog and the clipper by doing so.

Once you’ve established that your dog is comfortable with the clipper, try putting it close to the paws and finally touching the nails.

You can proceed to the following stage if your dog is relaxed and comfortable with the clipper getting close to his nails.

So you’ve tried holding the paws and exposed your dog to the clipper.

Let’s put it all together now.

Hold your dog’s paw and place the clipper near the nails as if you were clipping them, but don’t clip the nail just yet.

Keep an eye on your dog’s reactions to discover whether she’s nervous.

If she isn’t, you can try trimming her nail a little at a time if she isn’t already.

And there you have it. Cut slowly and only a small amount at a time.

During the session, don’t forget to compliment your dog and give him delicious goodies.

How to Cut Dog’s Toenail If The Dog Is Very Active?

Some dogs are simply too energetic to sit still during a nail-cutting procedure.

In that situation, one suggestion is to let your dog run about and burn off some energy before you start.

Swimming is the best activity since it not only relaxes and drains your dog’s energy.

It also softens his nails, making it easier to cut them afterwards.

Combining nail cutting and bathing is another possibility. You can give your dog a bath after playtime.

Bathing may be relaxing for dogs, and the water softens their nails.

Cutting them afterward is quite logical and doable.

In short, it is not uncommon for dogs to dread having their nails clipped.

There are several causes for this, which have been discussed above, so you can see whether any of them apply to you.

One thing to remember is that all it takes to make things happen is patience.

We understand how tough it can be to persuade your dog to like something he doesn’t like, but you can’t avoid nail clipping.

See also  Antibiotics For Dog Nail Infection (All You Should Know)

Later on, it would become a terrible loop: as your dog’s nails grow longer, they cause pain and damage, making nail clipping much more undesirable.

As a result, we are doing everything we can to avoid this.

Our dog isn’t the only one that dislikes having her nails trimmed.

At the sight of clippers, many dogs fear or depart the room.

If the dog flails, barks, or bites, the trimming process might be significantly more difficult.

Many pet parents avoid grooming their pets or delegate grooming to a groomer or veterinarian.

A fear of nail trims, on the other hand, seldom goes away on its own and can actually worsen over time.

It makes even difficult for even a professional to trim a terrified dog nail without the assistance of another person.

It’s best to start teaching your dog to relax during nail trims when she’s a puppy.

But it’s not too late if you’re dealing with an adult dog who already has a dread of the procedure.

Restraint, having a paw touched, the clipper sound, and the feeling of a nail being trimmed are all things that pets may dislike during trims.

Furthermore, a terrible previous experience such as having your dog’s nail clipped too short might make future nail trims more difficult for both you and your dog.

It is critical to begin with a blank slate.

Dogs typically have a bad association with clippers they’ve used in the past, so moving to a new set that’s not the same.

You can select between a pair of clippers with a different appearance or a whole other sort of clipper, such as a Dremel-style clipper with a motorized file.

What to do if your dog won’t let you trim their nails?

There are ways to make nail trimming less difficult.
Use a different model of nail clipper or a Dremel instead of a clipper to desensitize your dog to it.
If a dog is highly aggressive and you’re scared they’ll bite you, the best place to start is with your primary veterinarian.

What is a natural sedative for a dog?

Natural sedatives for dogs, like Rescue Remedy, are usually made from herb and flower extracts such a chamomile and lavender.
Pheromones and calming products are also natural ways to soothe an anxious dog.

What can I give my dog to relax him for grooming?

Trazodone has the ability to both sedate and calm a dog.
For grooming, veterinarian visits, thunderstorms/fireworks, and other short-term stressful events, this is a good dog sedative.
Low blood pressure is one of the side effects of trazodone, hence it should be used with caution or avoided in people with specific medical conditions.