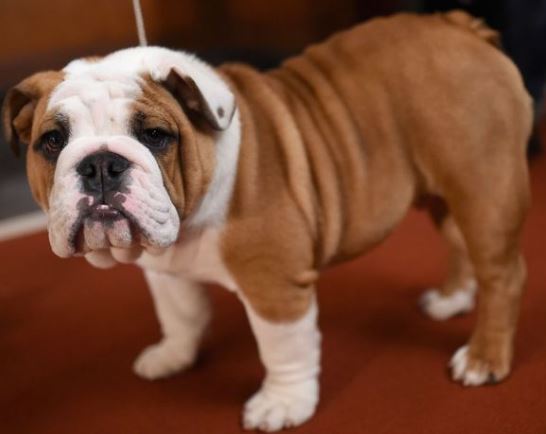 It has several times come to your hearing the name “Bulldog” — but if someone brings a bulldog around you, without that person disclosing the exact kind of dog, you won’t be able to identify it, right? Is your answer yes?

This article is for you; we’ll depict a few pictures to you showing the bulldog. So, stay glued to your screen as we continue. Moving on, let’s talk about the bulldog; the English Bulldogs are dogs, which have a grumpy look though adorable.

They are not just adorable, they are also a good choice, with which you can have fun. Furthermore, English Bulldogs possess a special kind of disposition, despite the fact that they have natural stubbornness.

The bulldog is highly prone to contact canine health conditions, he also deals with other health issues — your average pup doesn’t experience these. If you own this kind of dog — it’s essential that you give special care and attention to him, all the days of his life.

Are you part of those thinking of getting a bulldog as a pet? It’s important that you attentively follow up the list of English Bulldog health problems outlined in this article, in order to be conversant with the possible conditions you are likely to come across.

We want you to take note of the fact that not all the Bulldogs in existence will experience a large number of these conditions; even as not all will experience them, they are very much prone to them — the conditions — so having a knowledge of them isn’t a bad idea.

On this note, we move into what we have for you in this article, which is English Bulldog Health Problems. We have quite a lot listed, don’t ignore anyone, make sure you study them — so it won’t be such a big deal when experienced.

It’s really saddening that quite a lot of veterinarians think that the English Bulldog, among all breed, is the most deformed. Breeders take the choice of altering the appearance of the original bulldog, in order to ensure that they have oversized heads, smashed faces and smaller bodies.

Their skull bones are likely to push in, as a result of the breeding, making their face have the shortened look. And, it has, to a large extent, come in the way of the bulldog anatomy, and caused a change in the relationship between their soft tissue structures and facial bones.

The nasal passage, which is compressed, has made a bit crushed nostril and a really small trachea. As a result of this, inside the animal’s airway gets pressure — when there is pressure in the animal’s airway, it makes breathing difficult for this breed. It, very much, is responsible for the bulldog trait of snoring, which is popularly known.

If you notice that your bulldog struggles to breathe in humid or hot weather conditions, know that it’s because of the pressure. And, it causes them to gasp for air whenever they run. This may make him start breathing in an uncomfortable manner, or snorting and painting at all times, with no regard for his activities.

Also, note that some Bulldogs are likely to have eating problems — difficulty in eating. To add to this, there is a condition called canine obesity; Bulldogs are highly prone to this condition, and it makes the Bulldog’s breathing becomes more a problem.

This is exactly why you should be consistent on providing the bulldog with a healthy diet and moderate exercise — it’s very important. Due to this condition, the brachycephalic syndrome, your bulldog has to be left in a home, which is air-conditioned.

And also, your English Bulldog should be watched, watched closely, whenever it’s
involved in any activity that is strenuous, especially when the house gets hot. Don’t make the mistake of allowing your dog to force himself outside in hot times.

Up to 72 percent of the total English Bulldogs in existence are dysplastic. Close to the rate, 35 percent also have canine allow dysplasia, and in some may harbor loose shoulders
and knees. You have seen the word “dysplasia” mentioned numerous times in this condition; well, an animal is said to have dysplasia, when a bone of the animal does not swiftly fit into the joint made for it.

For you to check for this condition, it’s recommended that you get the X-rays of your dog — this condition is one, which can be inherited, and at the same time detected, while the bulldog is still called a puppy.

When dysplasia is found it any joint, it’s no doubt that lameness, pain will be experienced; it doesn’t make your dog agile, robust, instead it makes your dog lazy to run; it makes your dog reluctant to climb stairs or jump; causes a decrement in activity, which is already limited; and it’s so worse that it gives the dog difficult times whenever he wants to get up.

In general, he isn’t likely to encounter secondary symptoms, except when he gets overweight. And, except during the period when he experienced rapid growth at his puppy state, he was overworked.

READ ALSO: Don’t Give Your Bulldog These Home Made Foods ( See Why)

You should know that English Bulldogs are, as well, liable to canine intervertebral disk disease, hemivertebrae, and cruciate ligament rupture. These are all symptoms and conditions that can be helped by making your English Bulldog stay at a healthy weight.

Also know it that, obesity has the ability to make any kind of joint condition worse, so,  ensure that you give your dog walks and diet, which is appropriate, on a regular basis.

3. Skin Conditions.
Due to the kind of skin these Bulldogs have — loose skin and folds — they are liable to various kinds of skin conditions.

• Skin Conditions – Dermatitis
Dermatitis is a kind of condition that affects the skin folds of an English Bulldog. There’s an action the skin performs, it traps and rubs in moisture around the area of the tail of the dog, facial folds and lips.

In order to keep your dog away from Dermatitis, it’s essential that you, on a daily basis, clean out the skin folds of your Bulldog. Note that, dermatitis in dogs is a buildup of bacteria growth.

If your dog gets to experience dermatitis, just watch it, you will identify it without the help of anybody. The affected area will be bereaved of its fair, get reddened — hot spots — or produce an unpleasant smell.

4. Skin Conditions – Facial Acne Or Eczema.
Because of how short their snout is, an English Bulldog has to deep his face inside whatever he wants to smell. As a result of this, this breed has greater chances of having eczema and pimples on their chin and face — in other words, this breed — bulldog — is susceptible to having them.

They are likely to get pimples if you deliver food to them using a water bowl; this can happen because bacteria can be taken from the dish’s scratches. You can wipe them out with the use of some antibiotic ointment.

5. Skin Conditions – Demodectic Mange.
This very condition is experienced by all kinds of dog. The canine Demodectic Mange is a condition that’s well-known, because, not most, all dogs possess a Demodex mite, which they got from their mother when they were still young.

This mite, mentioned in the preceding paragraph, dwells in the hair follicles of a bulldog — dog —but won’t cause any issue at all. If you have an English Bulldog, which possesses an immune system that isn’t strong, he is likely to have Demodectic Mange.

It shows up as patches of red, a skin that’s scaly — where the dog tends to lose hair; this occurs on the head of the dog, at its front legs and neck. Generally, while your dog is still in its puppy stage, is when he experiences this, and without much attention, it can clear on its own. But, if it doesn’t, don’t hesitate to see your veterinarian for his say on your dog’s case.

6. Head Shakes.
This condition is an obnoxious condition for your dog. This is a condition where your dog shakes his head unintentionally, either from up to down or side to side. Sometimes, you can see your dog shake his head in a way that is a little bit violent, and that act can appear just like a canine seizure.

Seemingly, your dog will be aware and conscious of the whole thing. If you ever see this happen, don’t fail to take your dog to the vet in no time. This can happen because of stress experienced by the dog; not just that, it can also happen because of something serious — your dog might be facing excruciating pains. Low blood sugar can cause that, too.

7. Patellar Luxation. This disease, Patellar Luxation, happens in dogs that are smaller. How do you identify that a dog has this disease? The femur (thigh bone), patellar (knee cap), and tibia (calf bone) tend not to line up in a proper manner.

This has the ability to cause lameness in the leg that is affected, or an abnormal gait, bringing the unpleasant feeling to the dog — this makes the dog to either hop or
skip. This is a condition, which is likely to be present at birth.

Prevention Of English Bulldog Health Problems.
Above all, a bulldog is a very amazing dog, but it easily gets the various health issues stated
above. Don’t fail to keep a close watch on your dog — for all dog owners.

READ ALSO: See Why Dog Is Having Serious Itching & Solutions

As a person who wants to own a dog, the first thing you should do, as a preventive measure, is to buy your dog from someone who’s a reputable breeder. This will help you in getting the healthiest bulldog available. The breeders shouldn’t forget to do this before taking their dogs home: have your puppies dewormed and vaccinated.

Also, don’t forget to use mature and healthy dogs for breeding. Go to the Orthopedic Foundation for Animals and get certifications from them — certifications for knees, hips, and elbow. In addition, get from Canine Eye Registry Foundation (CERF) to be sure that their eyes are functioning well.

After that, the next thing is visiting your veterinarian to be told how you can treat the health problem of your dog.