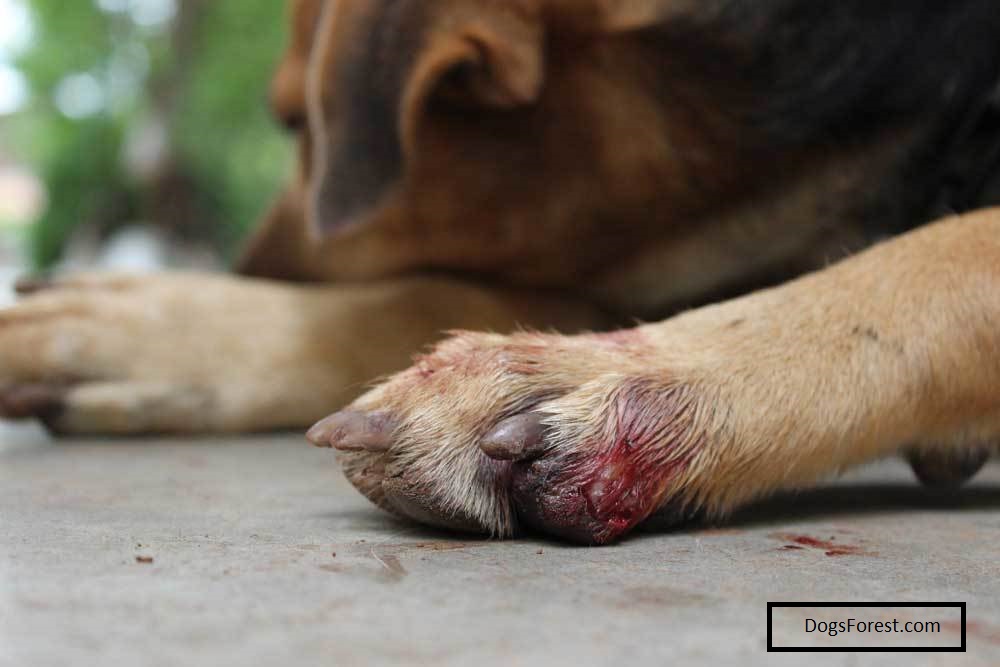 Trimming a dog’s toenails is a terrifying experience for most pet owners.

Every pet parent is concerned about cutting too far into the nail and hitting the quick.

The section of the dog nail with nerve endings and blood flow is known as the quick.

Dog toenail bleeding can occur if you cut too far back.

Depending on how often your dog walks and the surfaces they walk on, toenails should be cut every two to three weeks.

Nails that aren’t trimmed properly can grow back and pierce your dog’s paw pad and may result to dog nail bleeding.

This might result in infection and a lot of pain on your dogs nail.

In addition, if a dog’s nail grow too long, it impairs their posture by twisting their spine.

If your dog’s nail aren’t cut for an extended period of time, it might lead to major medical problems.

What is a Dog Nails Quick [ Answered ]

If you cut your dog’s nails too short, what should you do with them?

Even the most seasoned groomers make the mistake of cutting the nails too short.

Simply have a styptic pencil or clotting powder on hand, which can be found at most pet stores or pharmacies.

Simply put a styptic pencil to the bleeding nail or dip it into clotting powder placed into your palm.

What Should I Do If My Dog’s Toenail Bleeds Right Away?

If you become agitated, your dog will become much more agitated.

Simply relax and speak to your dog in a calm tone.

Have somebody individual fetch the items you’ll need to stop the toenail bleeding if you have one.

Because of the shock and discomfort of having their nail quick being cut or having a broken nail, your dog will most likely let out a little howl of pain.

The discomfort and bleeding will go away.

It may appear like there is a lot of blood at first, but it will soon cease if you act immediately.

To prevent blood from leaking everywhere, have your dog lie down in a calm manner.

It’s critical to keep your dog as quiet as possible so that nail clipping does not become a terrible experience for them.

The bond of trust between you, the pet parent, and your dog in terms of nail cutting begins at a young age.

You’ve been touching and massaging your dog’s paws since he was a puppy, so they’re used to humans handling their paws and nails.

This is in preparation for their nails to be cut.

This is a wise choice, especially if you aren’t sure how to properly cut your toenails.

Even if you’ve been doing it for years, cutting into the quick will inevitably happen.

So, how do you stop a dog’s toenail from bleeding from dog nail clippers?

Styptic powder is one of the most used treatments for reducing bleeding after cutting into the quick.

Ferric subsulfate, an antihemorrhagic agent, is present in the powder.

Within a few minutes, the blood vessels will constrict, clotting the blood flow and stopping the bleeding.

The powder also contains Benzocaine, a topical anesthetic that helps to relieve pain.

Kwik Stop is the most often used styptic powder among veterinarians and pet groomers.

Almost all specialist pet stores have the powder. Pour the ointment into the cap and gently press the dog’s nail into it if the toenail is bleeding. Hold the nail in place for about a minute.

See also  What is the Situation with Brittle Dog Nails? [Answered]

Ascertain that your dog is calm and as still as possible.

After the bleeding has stopped, properly clean the cap.

The first aid kits from Splash and Dash Groomerie & Boutique include styptic powder and everything else you’ll need to deal with any doggie medical emergency.

Some pet owners choose to use a natural cure such as baking soda or cornstarch.

Making a paste with some water and applying it with a cotton swab is the easiest way to utilize them.

Apply gentle pressure to the bleeding nail and hold for a few minutes after you’ve calmed your dog down and they’re lying motionless.

Styptic pencil function in the same way as styptic powder.

However, because they contain silver nitrate, which stings on contact, they are sometimes avoided at pet groomers and veterinary facilities.

Aside from that, the pencils are excellent in stopping bleeding.

Then press your dog’s nail against the pencil’s edge.

For a few minutes, keep the pencil firmly in place. Styptic pencils can also be used to stop bleeding from minor skin cuts.

You can use a bar of soap if you don’t have any of the above and need to deal with an unintentional toenail bleeding.

Work or gently drag the nail across the bar of soap after moistening it.

A fragrance-free bactericidal soap is the best type to use.

If you’ve done everything and the blood still won’t stop, consider wrapping the cut to help it clot.

This retains pressure on the nail and prevents your dog from licking or walking on it, which would increase blood flow.

How to Quickly Locate the Famous

If you’re going to nail trimming your dogs nail at home, you’ll need to be able to tell where the quick starts.

See also  Can I Cut My Dogs Nails With Scissors? [ Answered]

The quick is a canine equivalent of a nail bed.

Underneath the nail plate, connective tissue, nerve endings, and skin tissue are tucked.

A pink quick is easily visible in dogs with lighter opaque nails.

Detecting the quick in dogs with black nails is more difficult.

Until you start trimming, you won’t be able to see the quick.

Make tiny cuts into the nail in nail trim to avoid accidently cutting into the quick.

Examine the inside of the nail after each snip. In the middle of the nail, look for a whitish or gray dot.

The larger this dot appears, the closer you are to the quick.

Dog owner must stop trimming with a clipper when you see the circle and transfer to a Dremel to accurately shave down the nail.

How long does a dog’s nail bleed?

Fortunately, bleeding from a dog’s toenail normally stops after a few minutes.
That isn’t to say you shouldn’t take action.
Using a clean cloth, apply a warm soapy solution to the wound.
Not only will this remove any blood, but it will also prevent bacteria from entering the site, lowering the chance of infection.

Can dogs bleed to death from bleeding nails?

A healthy dog will not bleed to death if his toenail is cut—not even close!
While it’s sad that you’ve wounded your dog (which none of us wants to happen), this isn’t a catastrophic injury.

Can I put super glue on my dog’s nail?

The use of super glue isn’t as weird as it may appear.
In reality, the primary ingredient in super glue, cyanoacrylate, is frequently used to repair surgical wounds.
So don’t be concerned; this can be a really effective approach to reduce dog nail bleeding.
It’s safe to use on your dog because even oral incisions are closed with adhesive.