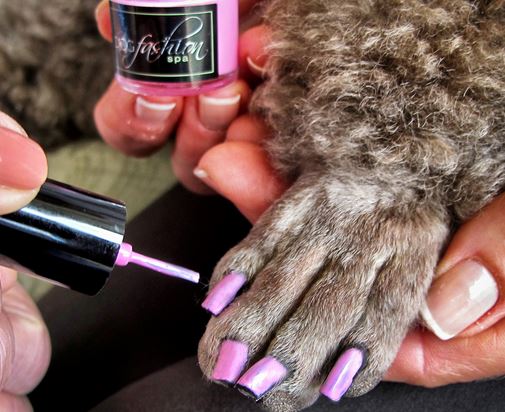 Can I Paint My Dog’s Nails With Human Polish?

I Painted My Dog’s Nails Human Polish is this harmful?: For many years and still counting, dogs have been unmistakably tagged as man’s most favorite pet. They are known and loved by their owners for their loyalty, security, and companionship. On the part of the dogs, they are most contented and comfortable with the feeling of belonging to a secure social environment.

Scientifically, dogs appreciate been caressed, stroked, and patted. These traits may be caused by the number of neural endings attached to dogs’ fur. In many ways, these dogs are beneficial to the human race even in the ways we do not know that they are.

For example, spending time with a dog increases the oxytocin hormone also called the ‘love hormone’, one which plays a factorial effect in emotional qualities such as trust, selflessness, and bonding. In other research, dogs react more rapidly to a human’s body language than other humans. Therefore, the attachment shared between dogs and humans is of the highest degree.

Due to the above reasons, many people have thought it wise and beneficial to take good care of their dogs. Just like humans in modern times have modified their body by means of incredible hairstyles, tattoos, piercings, and many others, dogs have been modified or groomed by their owners in the most implausible ways ever. Some have done this in ways like wearing for the pet expensive apparel, beautiful accessories such as bowls, collars, and caps.

They have groomed their dogs by shampoo washing, fur shaving, claw trimming, and other grooming activities. Some others have styled their dog’s fur and dyed their colors, others have well-trimmed their dogs’ nails and painted them; all for the reasons of grooming and beautification.

On this note, what is used to beautify a dog may either positively or negatively affect the welfare of a dog. Hair dyes if toxic can cause respiration problems for the dog, necklaces if too heavy as well as thick clothing during hot weather may cause irritability for the dog.

See also  How To Find The Quick On Black Dog Nails? [Answered]

In the same way, nail polishes may be dangerous to a dog’s health, how? Why? In the course of this article, these questions will be reviewed.

MUST-READ: This Is Why Your Dog Mail Develop Nail Bed Cancer

Can My Dog’s Nails Be Polished?

A good deal of might have wondered how possible it is to paint or polish a dog’s nails. Well, a dog’s nails can be polished and some owners have shown off the colorful art of painting their dogs’ nails on the internet.

During this procedure or grooming session, it is advisable to be very careful as touching a dog’s claws may cause irritability under which even the most well-behaved dogs might be tempted to scratch.

What Kind Of Nail Polish Should Be Used To Polish My Dogs Nails?

Some have experimented using human nail polish to groom their dog’s nails and in fact, nail polish for humans may appear beautiful and just as well as those of a dog. However, based on recommendations from vets and groomers, a dog’s nails should be polished with a dog’s nail polish and not that of a human.

Why Should A Dog’s Nails Be Polished Only with That of A Dog?

As a human will not take in a dog’s feed, multivitamins, additives, or apply a dog’s nail polish on his nails, a human’s nail polish should not be used instead of a dogs’ nail polish on a dog’s nails. Nail polishes manufactured for humans contain harsh chemicals that may well be hazardous to a dog’s health; adhesives and other such ingredients used in its production have strong odors that may negatively affect the dog if inhaled.

Nail polishes produced for dogs are formulated with chemicals that are not harmful to the dog. These claw polishes are used by pro groomers to polish dog’s nails for years, but manufactures have recently made it more available to the public and more comfortable and user-friendly for users that may want to engage in grooming their pets at the convenience of their homes.

READ NOW: Antibiotics For Dog Nail Infection (All You Should Know)

How Can A Dog’s Nail Polish Be Applied?

Due to the inconvenience of these nail grooming sessions for a dog and its owner, manufacturers have made the nail polishes dry in time to avert holding a paw still for a long period. However, there are procedures to applying a dog’s nail polish to its nail.

How Safe Is A Dog’s Nail Polish?

Unlike human nail polish which is acetone-based and toxic, a dog’s nail polish is quite safe in the occurrence of a dog licking or sniffing its nails because it is water-based and non-toxic. Also, human nail polish might glue to the fur of a dog and their presence on the skin is potentially harmful as well because of its acidic nature.

The components of human nail polish such as formalin, toluene, and dibutyl phthalate are poisonous to the dog in case of ingestion which is a factor that cannot be totally prevented due to instinctive behaviors.

For a better user experience during grooming sessions, the packaging of a dog’s nail polish is not in a bottle but comes as a paint pen. It is odorless and easier to create designs with.

Can A Dog’s Nail Polish Be Removed?

See also  Overgrown Dog Nails : What To Do? [Answered]

How Can I Tell If It’s A Dog’s Nail Polish?

However, the fact that dogs are curious accounts for safe-keeping on the part of the owner. Nail polishes of either dogs or humans must be kept in a cool and dry place away from the reach of pets and kids to avoid unnecessary accidents.

If by any means an accident should occur, the dog must be immediately attended to and taken to the vet without delay. While there might be little to worry about, symptoms such as vomiting and stomach upsets might be observed.

WATCH HOW TO PAINT YOUR DOG’S NAILS

How To Grind Dog Nails That Are Overgrown [Answered]
How to Prevent Unhealthy Dog Nails? [Your Solution]
What Can I Give My Dog To Calm Him Down To Cut His Nails? [Answered]